Ethereum still not ready for DeFi, say some critics

The price of Bitcoin declined by more than 13% within 30 minutes on Aug. 2. The shocking short-term price action caused $1 billion worth of liquidations in futures contracts for Bitcoin (BTC) and Ethereum’s native token, Ether (ETH). Following the rapid sell-off, traders are cautiously optimistic and are considering both bullish and bearish scenarios.

Before delving into the various scenarios traders have in mind for Bitcoin, it is crucial to understand what caused the correction. On-chain data from Santiment suggests that warning signs emerged when the growth of daily active addresses slumped as Bitcoin topped at around $12,000.

The number of active addresses is considered a key fundamental factor for BTC because it reflects Bitcoin’s network activity. Shortly after the price of BTC superseded the trend of active addresses, it fell rapidly. Santiment explained that “daily active addresses on the network were not keeping up with the surging price,” suggesting a swift correction. 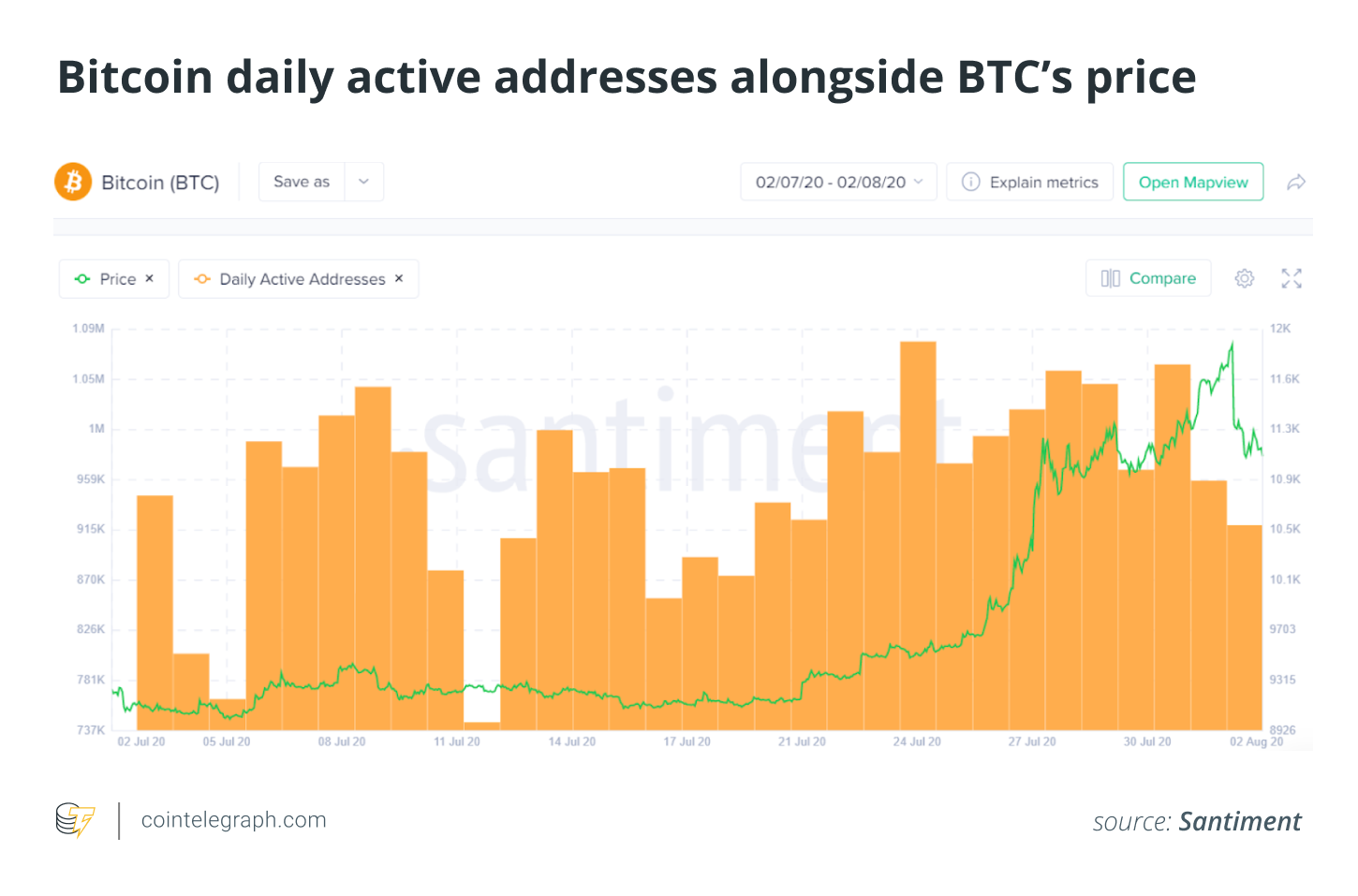 The sudden price drop also coincided with BTC hitting a historically relevant resistance level of $12,000. The $11,500–$12,000 range has served as a hard resistance zone for over two years, since 2018. Every attempt to break out of the range has led to a prolonged correction.

However, it seems that crypto market traders are overall optimistic about the medium-term price trend of BTC. Data from Binance Futures shows that the majority of “top traders” on the platform are currently longing BTC.

While the price of Bitcoin dropped to as low as $10,546 on Coinbase, traders say that the market structure of BTC remains compelling. Crypto trader Koroush AK outlined Bitcoin’s strong recovery from the $10,800 support level after the drop as $1 billion of long contracts were liquidated. He said: “Even with the crash over the weekend, $BTC still looks bullish.” 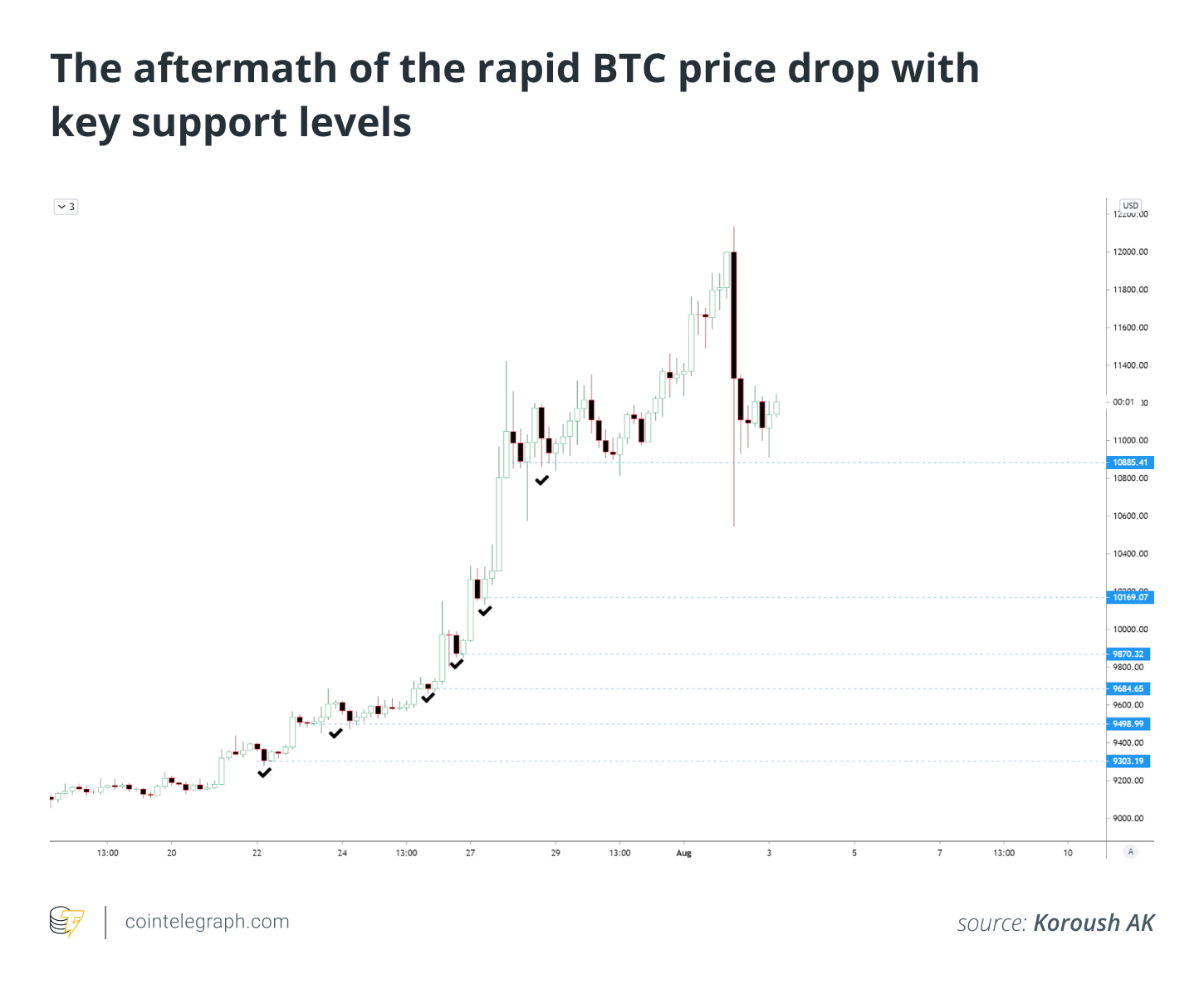 After mass liquidations, some traders suggest that the market will shake off “weak hands,” leading to Bitcoin cooling off and funding rates stabilizing, with the entire cycle potentially strengthening its momentum. Funding rates refer to the amount in fees that long-contract or short-contract holders on Bitcoin futures exchanges have to pay. When the market is mostly long, holders of long contracts have to pay a fee to short-contract holders, and vice versa when the market is mostly short.

Prior to the drop, the funding rates of major cryptocurrencies, including Bitcoin and Ether, rose to unsustainable rates, with Ether seeing its funding rate climb to 0.15% at one point. If a trader opens a long contract worth $50,000, a 0.15% funding rate would result in $225 per day in funding fees to maintain.

A pseudonymous trader known as “Redxbt” pointed out that there was approximately $77 million worth of bids on BitMEX after the drop. This suggests that BTC is still technically in an uptrend and that buyers are protecting the $10,500 support level: “Bull market tings — 77 million in bids hugging price. Perhaps they’re preparing for a very rare event, March 12th tier, to get some fills?”

Subsequent to the short-term correction, cryptocurrency trader Scott Melker said a potential hidden bullish divergence is building. Prior to the fall of BTC, Melker emphasized that there were glaring bearish divergences and that a retrace was imminent. But a bullish divergence emerges when an asset falls to a local low but an oscillator does not drop to a new low. It suggests that the momentum of the asset is intact despite recent price drops. Melker explained:

“It was building bear divs on multiple time frames, a retrace was inevitable. Now there’s potential hidden bullish divergence brewing, not yet confirmed. Price dropped with $15 of the previous major swing high, which was the line that signified a bullish break in structure.”

The overall sentiment remains optimistic around Bitcoin, but there are several bearish scenarios that can play out. Generally, most short-term bearish arguments revolve around the $10,500 support level. If BTC fails to remain above $10,500, it could hint at discontinuation of the rally.

The $10,500 level is considered to be an important support area because it marks the top of the previous rally. In February, the price of Bitcoin peaked at $10,550, establishing it as a strong resistance level. When BTC surpassed $10,500, it confirmed the level as a support area for a new range. Bitcoin trader Zoran Kole, who remains bullish, offered a bearish scenario:

“As far as invalidation, I think ~10.5 is the weekly level to hold for continuation. Otherwise this distribution schematic becomes rather compelling. Remember, trading is a binary decision tree. Changes in bias should occur near potential inflection points.”

Similarly, using a different technical analysis system called Ichimoku cloud, cryptocurrency analyst Josh Olszewicz suggested a break below $10,550 could lead to discontinuation. In the near term, Olszewicz said $10,559 and $10,832 would act as important support levels. He shared on Twitter: “best we avoid this zone down here if we want decent continuation in near term. already had the kijun bounce.”

According to Elias Simos, senior research analyst at Decentral Park Capital, Bitcoin sold-off when it matched the relative performance of gold. He explained that the sell-off coincided with the point that would have made BTC outperform the precious metal, and its potential correlation with gold could affect it in the weeks ahead.

A pseudonymous trader called “Rookie” foresees cryptocurrencies with low to medium market capitalizations underperforming against BTC in the future. If that happens, it raises the probability of BTC seeing profit-taking rallies, which might strengthen its momentum:

“I’m drastically reducing my exposure to low – med cap alt plays. The move is, and always has been to have as much $BTC and $ETH exposure for now. I don’t want to have money trapped in some low liquidity shit coin when / if things start going parabolic.”

The confluence of a historically challenging resistance level for BTC at $12,000 and high funding rates make for strong bearish scenarios. But bullish divergences, lack of resistance from $12,000 to $14,000 and a recent flush of over-leveraged futures contacts strengthen the argument for a prolonged uptrend.

Ethereum still not ready for DeFi, say some critics

A necessity to strike a balance

The UN’s ‘decade of delivery’ needs blockchain to succeed